Once again, Brandi Glanville is drawing attention to the report that claimed she and Denise Richards had a ‘months-long affair.’ This time, she shared a very suggestive tweet about Denise’s marriage!

Subtlety is not in playbook. The Real Housewives of Beverly Hills star couldn’t resist writing a not-so-PG tweet that seemingly referenced a report that claimed she and her co-star, Denise Richards, 48, had an affair! Brandi, 47, decided to play with fire after Denise tweeted on Jan. 29, “Any good tag lines for me for #rhobh ?!? And no… I did not quit 💎.” That led Brandi to write in a now-deleted tweet on Feb. 3, “For anyone wanting ‘tagline’ help this could work, ‘I might be married to a man but I am still allowed to eat pu**y.’” Bold!

We know Denise wouldn’t agree with that tweet. After the report of her alleged “months-long” affair with Brandi surfaced on Jan. 8, per

, Denise’s rep said the rumor “isn’t true” in a statement to People. It’s a big claim, since Denise has been married to Aaron Phypers, 47, since 2018 (the report claimed Denise and Brandi were having an affair throughout early 2019). Behind the scenes, though, we’ve learned even more drama that these hookup rumors have created. “Denise was stunned to hear that Brandi was saying they hooked up and she has an open marriage,” a source EXCLUSIVELY told HollywoodLife in Jan. 2020. “Brandi has been telling everyone that Denise and Aaron have an open marriage, and Denise is adamant that a hookup never happened. All of this has actually sparked the end of Denise and Brandi’s friendship.”

This is not the first time Brandi has stirred the pot on Twitter. “Their [sic] is a huge difference between hooking up with someone a couple of times and having a romantic relationship with someone,” Brandi on Jan. 14, followed by another on Jan. 20 that read, “Lesbihonest someone has had a lot of time away from shooting to come up with a story to try & ruin me. But it won’t happen. I own my shit. My life is good & filled with love, light and laughter. Now I’m off to the mall with 2 very handsome 12 yr olds 🥰😚😍.”

Any good tag lines for me for

So, what does the cast of RHOBH have to say about all of this? Camille Grammer was on Denise’s side, tweeting that the affair and that “someone is desperate for a diamond.” Meanwhile, Teddi Mellencamp kept us in suspense by telling HollywoodLife and other outlets at the iHeartRadio Podcast Awards on Jan. 17, “I can’t really say anything, I wish it all would wait to come out on the show and organically happen.” It sounds like the drama between Denise and Brandi will unfold once Season 10 of RHOBH premieres later in 2020! 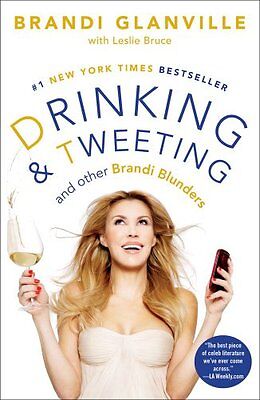 Drinking and Tweeting: And Other Brandi Blunders by Brandi Glanville, Leslie Bru
$4.25
in stock
Buy Now

'RHOBH' Star Brandi Glanville Reveals How She's Been Personally Impacted By The Coronavirus  The Blast...

The Drama Between Denise Richards and Brandi Glanville on 'RHOBH' - Distractify

The Drama Between Denise Richards and Brandi Glanville on 'RHOBH'  Distractify...

Brandi Lynn Glanville is an American television personality, author, fashion designer and former model. She is best known for appearing on the reality television series The Real Housewives of Beverly Hills (2011–2016, 2019-present).

Brandi Glanville breaks down over photos of her 'wasted'

Brandi Glanville is admitting she’s “not perfect” after photos of the former “ Real Housewives of Beverly Hills ” star intoxicated surfaced online. “For those of you that want to judge me, you can...

We would like to show you a description here but the site won’t allow us.

The drama surrounding Denise Richards and Brandi Glanville’s rumored affair will finally play out in Season 10 of ‘RHOBH,’ which premieres on April 15. Learn more behind-the-scene…

Denise Richards is rocking the upcoming season of “The Real Housewives of Beverly Hills.”. Richards, 48, is believed to have had an affair with former “RHOBH” star Brandi Glanville, an ...

Denise Richards has stopped filming the Real Housewives of Beverly Hills after a nasty showdown with her cast members who confronted her over having a months-long affair with Brandi Glanville ...

But it appears Brandi Glanville is no longer single - and in fact, she has a boyfriend that loves to show her off...all of her. On Monday, the 44-year-old former Real Housewives of Beverly Hills...

5 Splendid Ways To Promote Affiliate Programs - Without Spending A Lot On Advertising!